Jay and the Americans 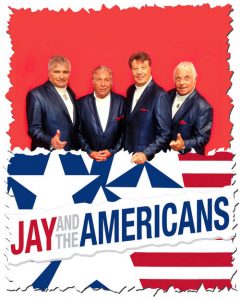 Jay and the Americans biography is a trilogy.  Incarnation (1) starts in 1959 with a vocal group called The Harborlites. It consisted of Sandy Yaguda (Deanne), Sydelle Sherman, and Kenny Rosenberg (Vance), and was so called because they lived in Belle Harbor, New York. Actually it originally consisted of six, Sydelle’s sister Gail, Ritchie Graff, and Linda Kahn. The prerequisite for joining was owning a white dinner jacket and not being completely tone deaf.  They all attended Far Rockaway High. One of the owners of Ivy Records, Stan Feldman, also lived in that neighborhood and The Harborlites went to his home to audition for his label. He thought they were terrible and told them to go home and do a lot of practicing. Linda, Gail, and Ritchie turned in their white jackets and the three remaining members practiced constantly. When they thought they were good enough they went back to his office to audition again. This time they were signed to a contract and recorded their first record “Is That Too Much To Ask” written by Sandy with Sydelle singing lead vocals and Kenny & Sandy as back up vocalists. Released on Ivy Records but purchased and distributed by Jaro Records (J. Arthur Rank Organization. Cousin Brucie (Morrow), a very popular New york City disc jockey, liked the record and because of him it was a local hit. About then they met a man named Jim Gribble. He was a manager and he handled a lot of popular groups that were having record success like the Mello-Kings, The Jarmels, The Mystics, The Passions, Paul Simon of Tico & the Triumphs, and we were impressed. We signed with him. The Mystics at the time were minus a lead singer, Phil Cracolici, who had to drop out of the group for a while, just after their big hit “Hushabye”. John Traynor filled in as their lead singer and recorded “White Cliffs of Dover” and “Blue Star” with them, but he was unhappy because he felt like an outsider and knew they would never accept him as an equal. They had grown up together and resented anyone trying to replace Phil. Just about then Sandy and Kenny decided they wanted to have a male group, and in Gribble’s office, they decided to join together and form a new group. Sandy called his boyhood Brooklyn friend Howie Kirschenbaum (Kane), and the then unnamed Jay and The Americans was formed. John “Jay” Traynor was born in Brooklyn, New York March 30, 1943, and moved with his mother to Mineola on Long Island in 1959 where he formed his first group The Ab-tones. Then on to the Mystics and then to the un-named group.

In 1960 the group auditioned for another Belle Harbor music writer/ producer named Phil Teitlebaum (Terry Phillips). Through Terry’s connections the group auditioned for Jerry Lieber &Mike Stoller the hottest producer/songwriters in the business. They sang acappella, a song by The Five Keys“Wisdom of A Fool” and some Phillips material.  When Lieber and Stoller criticized the Phillips material the group had been practicing, Phillips pulled the boys out of their office. Kenny got angry and upset and marched back into their office the next day and told them off. He walked out of their office again, but this time with a record deal. L & S built on the groups natural doo-wop harmonies but pushed the envelope with Traynor’s pop flavored lead vocals. They also were into spoofs and tongue in cheek writing.  But when they tried to name the group Binky Jones and The Americans, the boys were having none of it. Hence the compromise of Traynor’s nickname, Jay. Hence, Jay & The Americans were officially in business.

West Side Story was a big movie at the time, ready for release. United Artists needed some music coverage to promote the movie.

Lieber & Stoller had  a production  deal with U. A.  & signed J & The A’s to them. Their first recording was Tonight from West Side Story. It was a really good record but U.A. had two of their other acts record Tonight also. Most of the promotion money was spent on the two more well-known acts, Ferante & Teicher & Ralph Marterie. The single by J & A’s still was a local hit selling 40,000 copies around the New York area.

The second record was “Dawning” b/w “She Cried”. “Dawning was supposed to be the hit side but very little happened with it. The record was out for six months when Danny Kessler came running into the office yelling “we’ve got a hit”.  A

West Coast Disc Jockey,had flipped out over “ She Cried” and had locked himself in the broadcast booth, playing it over & over again for six hours. The phones at the station lit up and the record became a huge hit. The “She Cried” album was released shortly thereafter. It contained almost all Drifters and Lieber & Stoller material.

With the success of “She Cried”, Jay and the Americans were booked on a continuous string of one niters. The constant travel and the failure of the next two singles, proved too much for Traynor. He started missing rehearsals and the guys thought he wanted to go solo. He admitted he had been thinking about it and the guys said “don’t think, we’ll go on without you” (Brooklyn Attitude).  Actually it was a sad day for everyone involved. John Traynor”s solo career was less than it should have been. To this day The Americans always say “Traynor was a great singer with great style and as smooth  a voice as they ever heard.

Meanwhile (back in the jungle) The Americans were without a lead singer. While minus a lead, The Americans sang backup vocals on Bobby Goldsboro’s “See The Funny Little Clown” Marty Sanders who had been with the group off & on as a guitar/background vocalist (on salary for live gigs ) and who had also sung some backup on the “She Cried” album was now a full member of the group. This had happened when they were performing in Washington D.C. at the Rocket Room. Traynor was still singing lead & Danny Kessler (their manager) had suggested it since he was making more than the rest of them as a paid musician. Marty was thrilled “til he figured out the math. Anyway he was with them at a rehearsal at Howie’s house when a bulb lit up over Howie’s head. Hey Marty he said, “what about that guy you sing with”. Who, Dave Blatt? Marty replied. He‘s married with a kid and he works full time selling shoes at Thom McCann,  so I doubt if he’s interested, but I’ll call him anyway, ’cause ya never know.

So he called David Blatt his neighbor and singing buddy and tells him J & A’s are looking for a lead singer. You know they sing “She Cried”. Dave says, “I can sing that easily“. He was a really great mimic and sounded exactly like Traynor when he later did that song on stage. But I’m getting ahead of myself.  Marty and Dave sang together in “The Two Chaps”. The Two Chaps. also had been signed to Ivy Records at the same time as The Harbor-lites, though they never crossed paths. They recorded “Please Forgive Me “on Atlantic label and later recorded with the Empires on Epic Records. One record only was released. Written by Marty & Dave called “Time and A Place”, with Dave singing lead b/w “Punch Your Nose” with Marty singing lead. This too was a short lived group.

Anyway, Dave skeptically drives from Brooklyn to Belle Harbor. Queens (The Rockaways) for an audition at Sandy’s parents’ home. He pulls up with rope tying down the hood of his car, since the latch had been broken.

They are waiting in the basement to meet this guy that Marty says can really sing. When he gets there Sandy says “why don’t you sing something that you are comfortable with, that will show us how you sing. Marty plays one chord on his guitar and Dave sings “Cara Mia” acappella and blows all of them off their chairs. At the end of the song they are all laughing because they look at the staircase leading into the basement and it’s filled with Sandy’s parents and several neighbors who came running in to hear who was singing.

It was obvious that Dave wasn’t Dave anymore, he was Jay # 2. The first recording with the new Jay was “Only In America”, and the story behind it is fascinating.